Over the last few days I have been going back and finding some of the PA death certificates on Ancestry that I didn't look for when the group first came out. These are mostly certificates that I already had sent for so I kinda forgot about looking for them. Well this morning I remembered that I had not looked for the certificate for my Grand Uncle, "Baby" James. This was what my grandmother always called him when she talked about him. That was most likely because they had another son that  they also called James(this was my grandfather's name). Anyway, I had sent for "Baby" James' death certificate when I found he was buried with his Gunther grandparents and that gave me his death date.
The citation for this certificate is:Pennsylvania Department of Health, death certificate no. 73682 (1922), James McCarry; Bureau of Vital Statistics, New Castle. 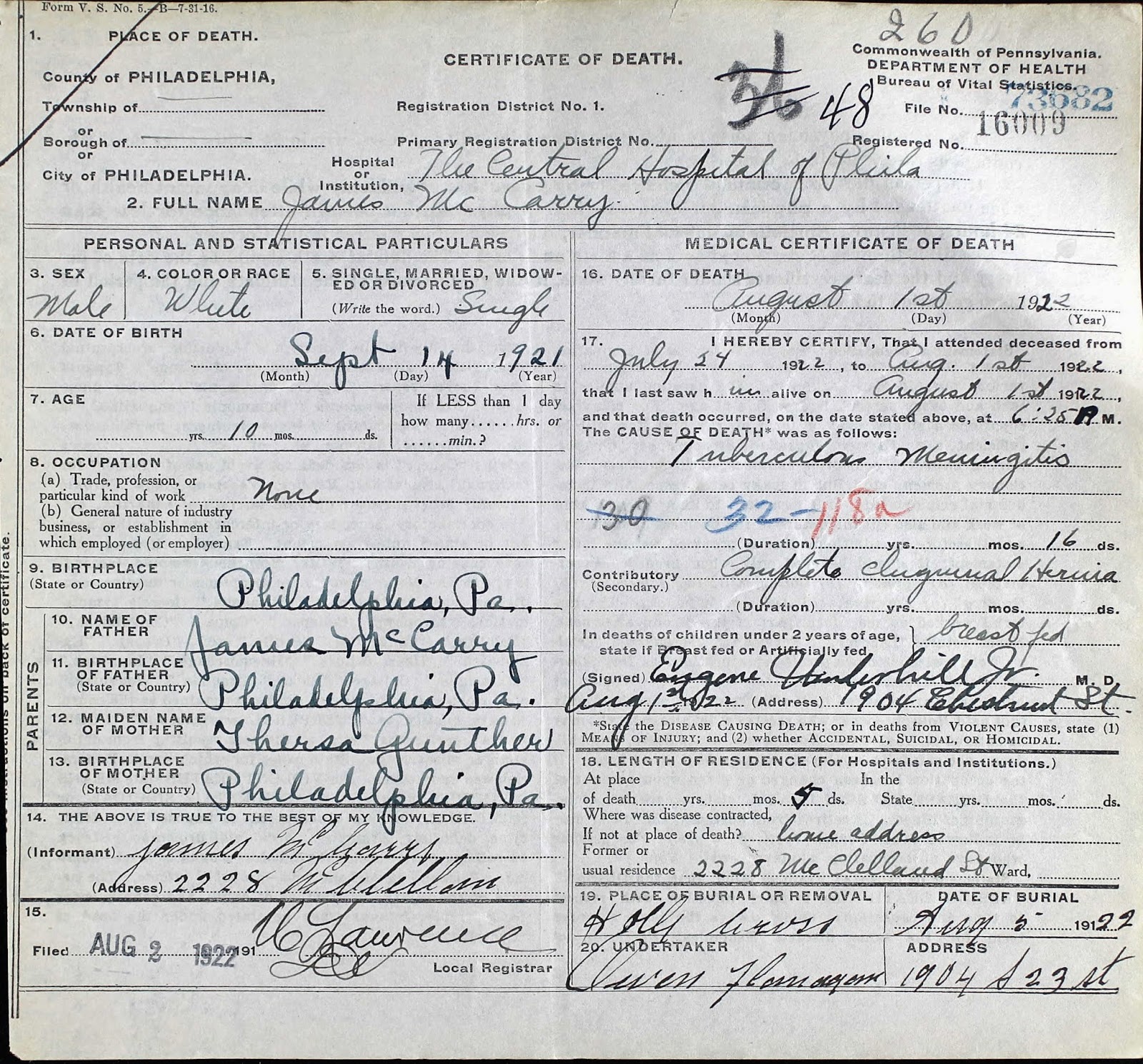 So on the search for this record another record shows up with the same parents. Surprise I see a Death Certificate for Bridget Marie McCarry. I always thought it was funny that my Nana never seemed to talk of this baby, it was my mother that told me about this baby that had the name Marie and that was why my mother's middle name was Marie. So I had not found anything on this baby before. According to the certificate she was premature and lived 2 days. And it said that she is buried in the same cemetery as James but she was not on the list as buried in that grave. I will have to look into that. the citation for this certificate is:Ancestry.com. Pennsylvania, Death Certificates, 1906-1924, No. 82841(stamped), Bridget Marie McCarry entry, died 5 Aug 1924; digital image: accessed 25 May 2014; citing Pennsylvania (State) Death certificates, 1906-1963 Series 11.90(1,905 cartons), Records of the Pennsylvania Department of Health, Record group 11. Pennsylvania Historical and Museum Commission, Harrisburg, Pennsylvania. http;//www.phmc.state.pa.us/ 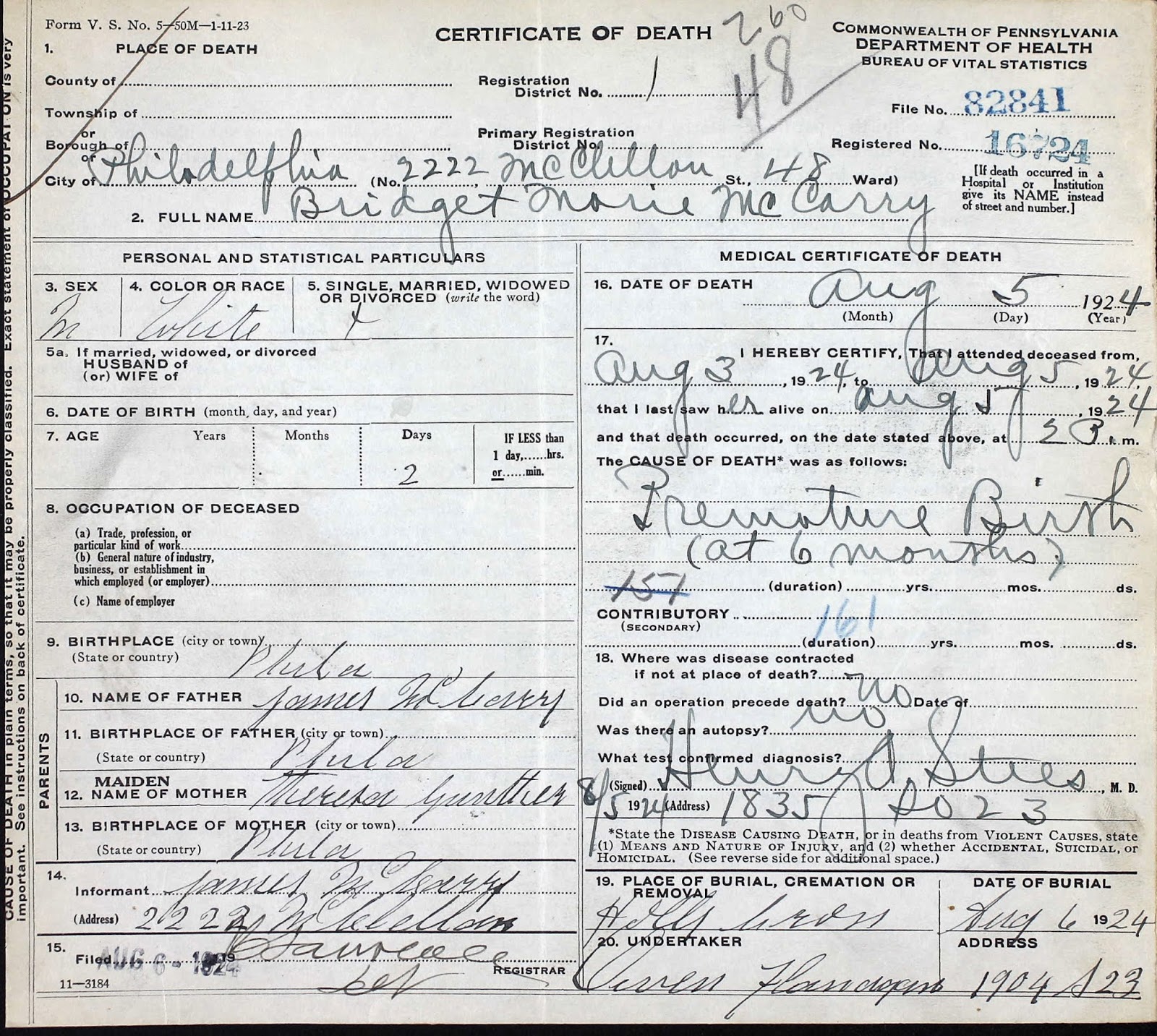 But this was not the only surprise I found this morning. My McCarry great grandparents, James F. and Bridget had 6 children that I knew about. Last year I was finding Philadelphia birth records at the Family History Center. I found the one for their youngest, Francis, who was born in 1906. This was the first and only one of the records that I found that had the number of children the mother had and how many living. This certificate told me that Bridget had 7 children and 6 were living. So before I was doing this I had found a death record on Family Search that I had put aside. Everything matched up but it had the father's name as John McCarry instead of James, and I didn't know about the 7th child. But I went back and looked at this and thought this is most likely their first child not Margaret as I had thought. So this morning when I was pulling over the death certificate for Bridget Marie I see another record listed on the search for Mary McCarry with the my great grandparents listed as the parents? When I opened it I found they had an 8th child, Mary was stillborn in Sep of 1920, this was the month before my grandparents were married. Mary is also buried at Holy Cross cemetery so I think I need to make another trip to find out about these two graves. The citation for this certificate is: Ancestry.com. Pennsylvania, Death Certificates, 1906-1924, No. 99899(stamped), Mary McCarry entry, died 19 Sep 1920; digital image: accessed 25 May 2014; citing Pennsylvania (State) Death certificates, 1906-1963 Series 11.90(1,905 cartons), Records of the Pennsylvania Department of Health, Record group 11. Pennsylvania Historical and Museum Commission, Harrisburg, Pennsylvania. http;//www.phmc.state.pa.us 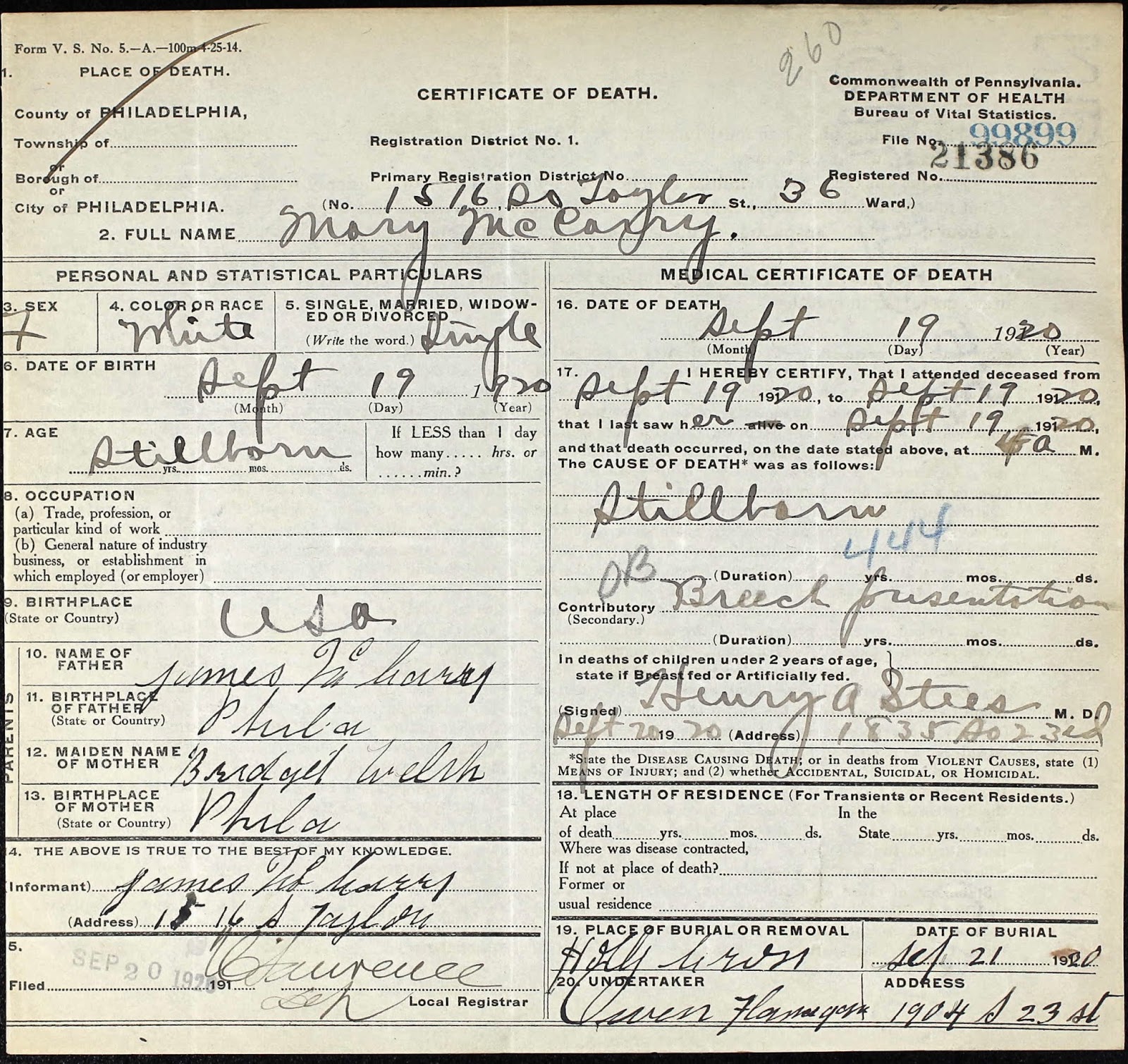 So I guess it will be another trip to Holy Cross Cemetery to check out where Bridget Marie and Mary McCarry are buried.

And once again I find, Start with what you have and keep on looking, you never know what you will find.