When my Grandmother spoke of him she called him Baby James. I guess that was partly because they later had another son they called James. But Baby James was the first child of James and Theresa McCarry. I found out the details that Nana never spoke about when I went to Holy Cross Cemetery looking for Catherine and Emil Gunther, Baby James' maternal grandparents. I found that he is buried with them. James' cemetery card said that he was 10 months old when he died on 1 Aug 1922 and that his cause of death was Stomach Trouble. I ordered his death certificate and it recently arrived. His date of birth was 14 Sep 1921 and the cause of death was Tuberculosis Meningitis. I don't have a photo of a headstone because there is none, but I wanted to write about him.

Email ThisBlogThis!Share to TwitterShare to FacebookShare to Pinterest
Labels: mccarry

Emil Gunther is one of my Maternal Great Grandfathers. I have written about him before. But he is still on the top of my Madness List so I thought I would talk about him again. I wrote a few weeks ago that I was waiting for Emil's death certificate to come. Well it finally came and it has not given me any clues at all. He and his unknown parents all came from Germany! Well I guess that I am happy that I know more about him then I did this time last year. From the documents I have accumlated I have address where he lived at least from when he was married to Catherine McCarron. So the man is still at the top of my Madness List and he is also a Mystery in so many ways. 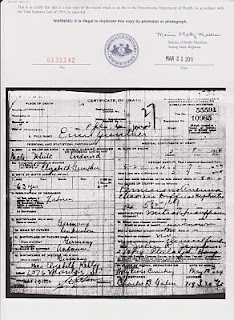 Email ThisBlogThis!Share to TwitterShare to FacebookShare to Pinterest
Labels: gunther

The Story of Miss Mary McCarry 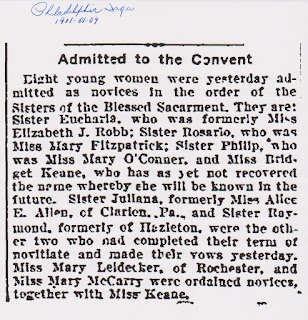 Mary McCarry was the second child born to Irish Immigrants, Patrick and Margaret (O'Connell) McCarry. She was the first of three? that were born in Connecticut. I have the question because according to the 1900 Census they had 6 children 4 living, and I have only accounted for 5 at this point. The other two born in Connecticut were James Francis (my great grandfather) and Patrick Joseph. I had found that Patrick was born in Thompsonville, CT from his Marriage license and his WWII registration. Then I found that James was born in Waterbury, CT from his Marriage license. So I figured that Mary was born in another town also. I found this clipping while searching on Genealogy Bank. I had known that my Grandfather had an aunt that was in this order, but I had thought it was his mother's sister not his father's. Well after finding this on Sunday, I called the Mission on Monday and spoke to the archivist. She told me that she did not have much on Mary because she was one of the early Sisters, the order was founded by Saint Catherine Drexel in 1891. The records they have did show that Mary's name was Sister Patrick McCarry and that she died 9 Aug 1932 and is buried at the Mission. The records did show that she was born in Naugatuck, CT and was baptized at St Francis Church. Can I say BINGO! They did not have much, but what they had was great! So 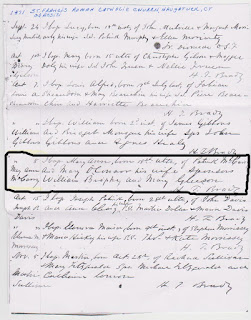 my next call was to St Francis of Assisi (who happens to be my favorite saint) Church in Naugatuck, CT. After a few missing each other I spoke with the secretary on Tuesday morning. When talking to her I mentioned that James was born in Waterbury and I did not know if he was Baptized there also. She thought he could be since that is the next town over. She told me that she would see what she could find and call me back. Well she called back in about an hour and said she found Mary's record and would send me a copy. She also found James' but I will save that for another time. So on Friday I received this record. To finish this story I still have to get her death and birth records but I am just loving what has happened in just a week beginning with a little newspaper clipping.
So don't overlook the little mentions you might find in a clipping, you never know what it could lead to!

Email ThisBlogThis!Share to TwitterShare to FacebookShare to Pinterest
Labels: mccarry

Two weeks ago I went to the Philly Archives to find copies of the marriage certificates that I had found in the index on Family Search. I had found the license numbers for my mother's parents, James J. McCarry and Theresa V. Gunther. For James' parents, James F. McCarry and Bridget Welsh. For Theresa's parents, Emil Gunther and Catherine McCarron. And James F.'s brother Patrick McCarry and Frances Gallagher. I was able to get all but my grandparents that day because the archives only has microfilm for up to 1915 and they were married in 1920. So last week when I was back in the city again I went to city hall and ordered the copy of their certificate at Orphans Court. It arrived today. Adding to both the answers and more questions.

The second big information I was looking for was answers about my grandmother's father, Emil Gunther. This man has been such a mystery! My grandmother talked about her father all the time. I knew he came from Germany. the only place she ever said was that it was the Black Forest. Not a big help! Had an idea when he was born. My cousin had given me a date a few years back. I have not been able to find him in a census and a few years ago I found out that my grandmother's oldest sister was her half sister. So he had been married before my great grandmother. and the mystery grew! then this past October I found Catherine McCarron Gunther's death record. My grandmother had always said her mother died when she was a little girl. Well she died in 1914. So I went to the cemetery to find out about her death and was hoping that Emil would be buried there also. I had a bonus that day. Not only did I find that Emil was there and that he had died in 1924, but also there was my grandparent's first child that had died at 11 months old in 1922. So I ordered their death certificates but they have not come yet. So I will have to follow up on that information. Coming back to the information from the marriage certificates. Well his place of birth on both his marriage certificate and my grandmother's was..... you guessed it......Germany! So I still have no idea where in Germany he was from. So that will be a continued work in progress. But there was another mystery on his marriage certificate. It said that this was his first marriage. that did not match what I had known. So he will continue to be a work in progress.

So on to the questions that came out of these certificates. Emil was not the only one that gave me questions. First, my great grandmother, Bridget Welsh McCarry. the information I had from her death certificate was that her birthdate was 23 Nov 1875. Her son Thomas was the informant, her husband, James F, had died 10 years before. Well when I saw their marriage certificate her birth date was 6 April 1873. I could see if she lied about her age because she would have been under age if she was born in 1875. And there was not a consent with the certificate. But these dates do not match in anyway at all! So I need to try to find a birth record for her. Another work in progress.

So I am really excited to get these documents in the last couple of weeks. While I am disapointed that not only did I not get all the answers I was looking for, but more questions were added, I ask the question.....what would we do if we had all the answers about our family????? 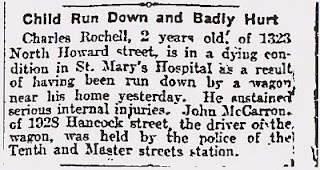 Child Run Down and Badly Hurt
Charles Rochell, 2 years old, of 1323 North Howard Street, is in a dying condition in St. Mary's Hospital as a result of having been run down by a wagon near his home yesterday. He sustained serious internal injuries. John McCarron, of 1928 Hancock street, the driver of the wagon, was held by the police of the Tenth and Master streets station.
Philadelphia Inquirer
16 Aug 1904