A couple of weeks ago I found a Patrick McCarey on Ancestry in the "Index to New England Naturalization Petitions, 1791-1906". I was excited, things seemed to fit. It had the address in Naugatuck, CT. They lived in Naugatuck in 1871 when their daughter Mary was born. The location of the court was Waterbury, they lived in Waterbury, neighboring town to Naugatuck, in 1873 when their son James, my great grandfather, was born. But the date of the Naturalization was 26 Mar 1867. Could this be my Patrick McCarry???? The citation for this index is: National Archives and Records Administration (NARA); Washington, D.C.; Index to New England Naturalization Petitions, 1791-1906 (M1299); Microfilm Serial: M1299; Microfilm Roll:24 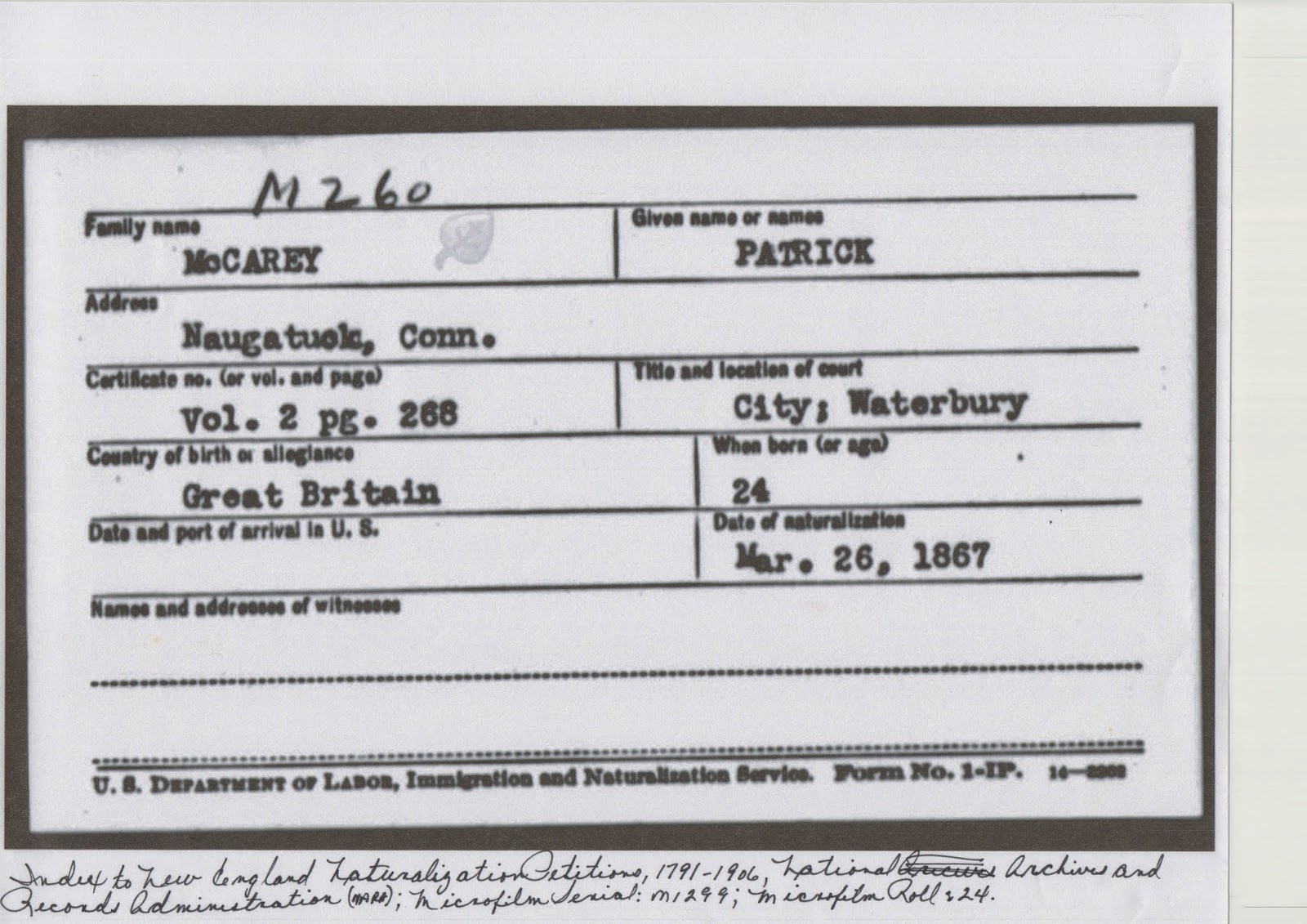 In the 1870 census, Patrick and his wife Margaret were living in Philadelphia. Their son Hugh had been born 3 months before the census and was born in Pennsylvania. But a year later they were in Naugatuck, CT. And from what I had found up until now, was they had 3 children while living in Connecticut, the 3rd being Patrick born in 1879 and then went to New York, as in the 1880 census. And they had another daughter, Margaret, born in New York in 1881. Then went back to Philadelphia settling in Manayunk and had another son, John, in 1884.

Then a couple of days after finding the Naturalization index I found them in the 1875 New York State Census. They were living in Orange County. So they had left Connecticut and went to New York and then back to Connecticut where Patrick was born in 1879, then back to New York. So maybe it is possible that Patrick lived in Naugatuck and was Naturalized there before going to Philadelphia and marrying Margaret and having Hugh. The citation for this census is: Ancestry.com New York, State Census, 1875(database on-line), cited from Population Census of the state of New York, for 1875, Orange County, town of Montgomery, p. 15, dwelling 108, family 130, the Patrick McCar[r]y Family, Microfilm. New York State Archives, Albany, New York. 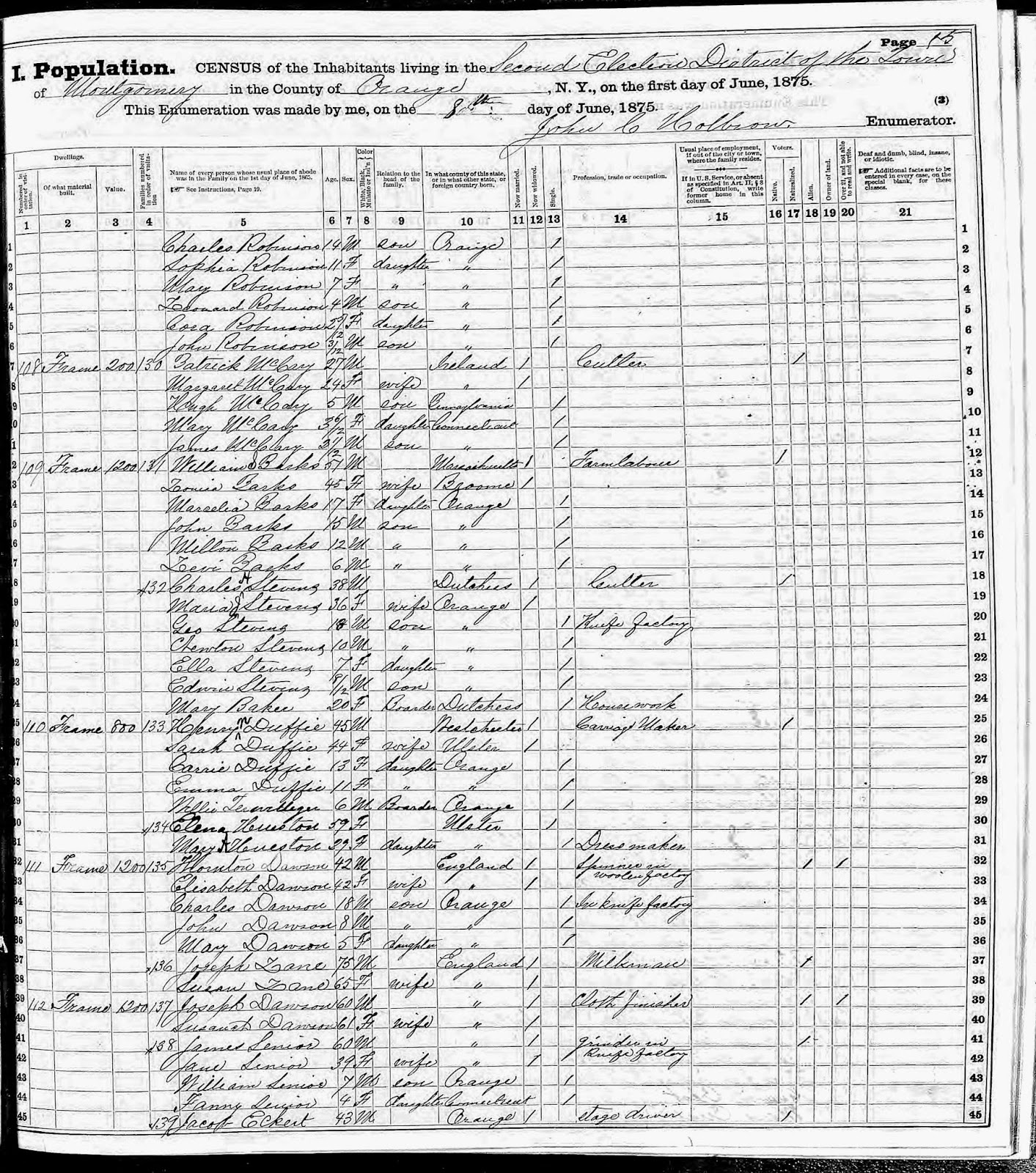 So I looked up where the actual Naturalization records for Connecticut were and found it is at NARA -Boston. I called to see about the record and was told to send an email with the information. I heard back that they found the record for Patrick McCarry and yesterday I received the record in an email.They did warn me that there was not much genealogical information in the record but I was hoping that there would be enough to show that it was the right person. Well in reading it over and over again I am still now totally sure that it is for my Patrick McCarry so I will have to keep working on it and see if I can find proof that it is him or not!!! The citation for this record is: New Haven County, Connecticut, city Court held in the City of Waterbury, City Court Naturalization Record Book Vol. 2, pg. 268, Patrick McCarey, 1867, National Archives and Records Administration(NARA)-Boston.

So I will start with what I have and keep on looking!